Celebrate World Animal Day and share your love for creatures great and small!

World Animal Day aims to raise the status of animals to ensure higher welfare standards. It doesn’t matter where you live in the world, what political system you live with or whether you have a religion or not – you still have a role to play. There are so many events taking place around the globe check out www.worldanimalday.org.uk and join in! By celebrating World Animal Day we can promote social justice for animals in a human centered world. You will be in good company: Twiggy, Jilly Cooper, Stefanie Powers, Virginia Mc Kenna, Pete Wedderburn and Maureen Lipman are all supporting World Animal Day.

The question is not, ‘can they reason?’ nor, ‘can they talk?’ but ‘can they suffer? Why should the law refuse its protection to any sensitive being?” – Jeremy Bentham (1789). 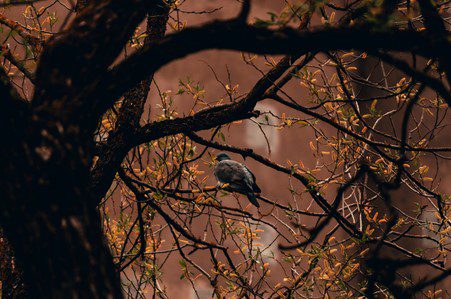 Wood pigeon resting in the branches.

Learning that animals are sentient beings, able to experience sensations and emotions just like us is key to our understanding.  Because animals don’t talk, humans must observe animals closely to appreciate their needs and we should extend this kindness to all animals.  Many of us need sensitising to the animals around us.  When was the last time you considered the insect you swatted away or the wood pigeons cooing in local woodland?  Once we become aware of animals, we can start to enjoy their behaviour and respond with compassion.

Sadly, animal protection is essential in the world we live in.  Animals in the food chain are commodities and the profit motive means that animal welfare is often forgotten.  Puppy farms and wildlife trade although illegal still function on the black market.  Zoos and some environmental tourism can be very cruel, ignoring the natural needs of wild animals to generate income.  Some people will use animals for financial gain no matter what the cost to the animal.  Often where people suffer in poverty or are abused, animal welfare can seem insignificant.  This is never the case and animal welfare charities throughout the world are on hand to educate people and rescue animals in danger. 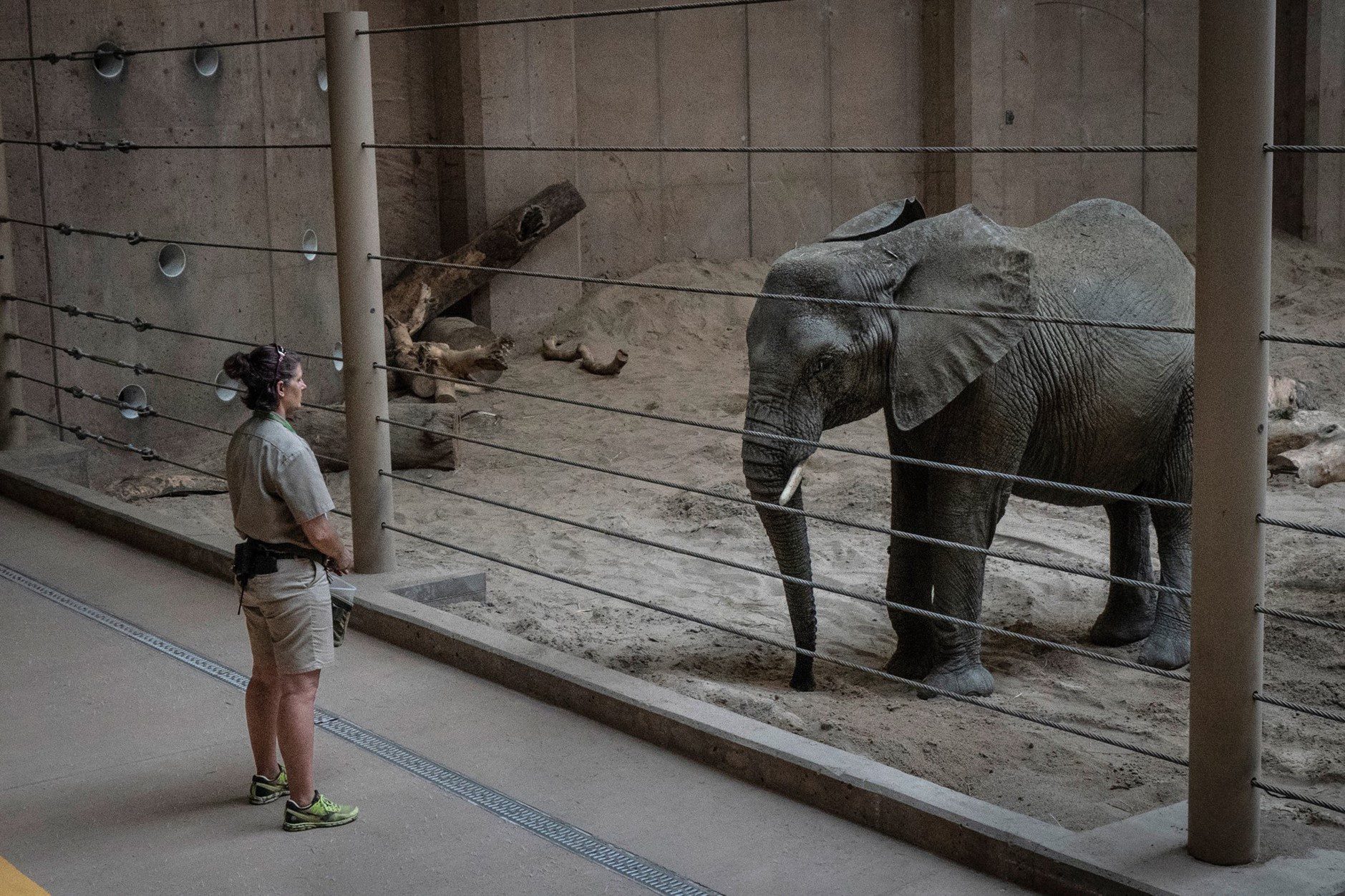 photo credit NY Times, showing how US zoos still import elephants under the guise of ‘saving’ them.

UK could become a world leader in animal welfare

The UK has a proud history of animal welfare reforms and as early as 1822 a law was passed to prevent cruelty to cattle. Today, the UK looks set to pass the Animal Welfare (Sentience) Bill which will mean that the Government must consider the welfare of sentient animals in all its policies. Scientists continue to investigate the animals around us and now we know that as well as vertebrates (mammals, birds, fish, amphibians and reptiles) some invertebrates such as squid, octopus, crabs and lobsters are also sentient. With our newfound knowledge comes responsibility and it is up to humans to behave in respectful and civilised ways towards our animal friends. 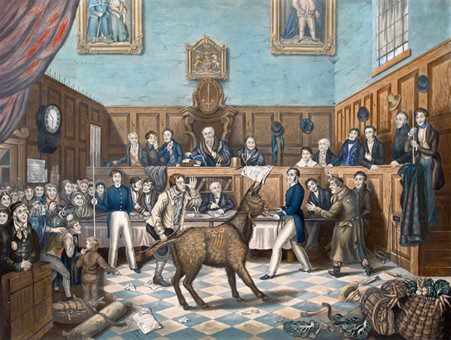 A painting of the trial of Bill Burns, the world’s first known conviction for animal cruelty under the 1822 Martin’s Act. Burns was found beating his donkey. Richard Martin, also known as “Humanity Dick” brought the donkey into court making history.

How does it feel that many farm animals such as pigs, cows, chickens and sheep are as intelligent as our pets or small children? Can we sanction industrial farming knowing that people can be just as healthy on a vegetarian diet? Manufacturers rely on us looking the other way and not associating a real live pig with the next slice of bacon. Our traditions and inertia play a big part in the continuation of our animal eating habits but maybe today we can look for alternatives where animal welfare plays a part? If you are a meat eater, pledge to eat less meat and search for your nearest certified organic farm where you can be sure that the animal has had a good life in a natural environment.

If slaughterhouses had glass walls, the whole world would be vegetarian.” – Linda McCartney.

Fairness towards animals is a big deal. It means making sure that individual animals can display their natural behaviours without fear and that we promote the survival of species and animal groupings throughout the whole world. Ensuring biodiversity is essential to avoid the appalling tragedy of orangutans and other animals in tropical forests that have been destroyed for palm oil plantations. As well as not being fair to animals, humans will suffer as biodiversity loss and climate change now control our world. 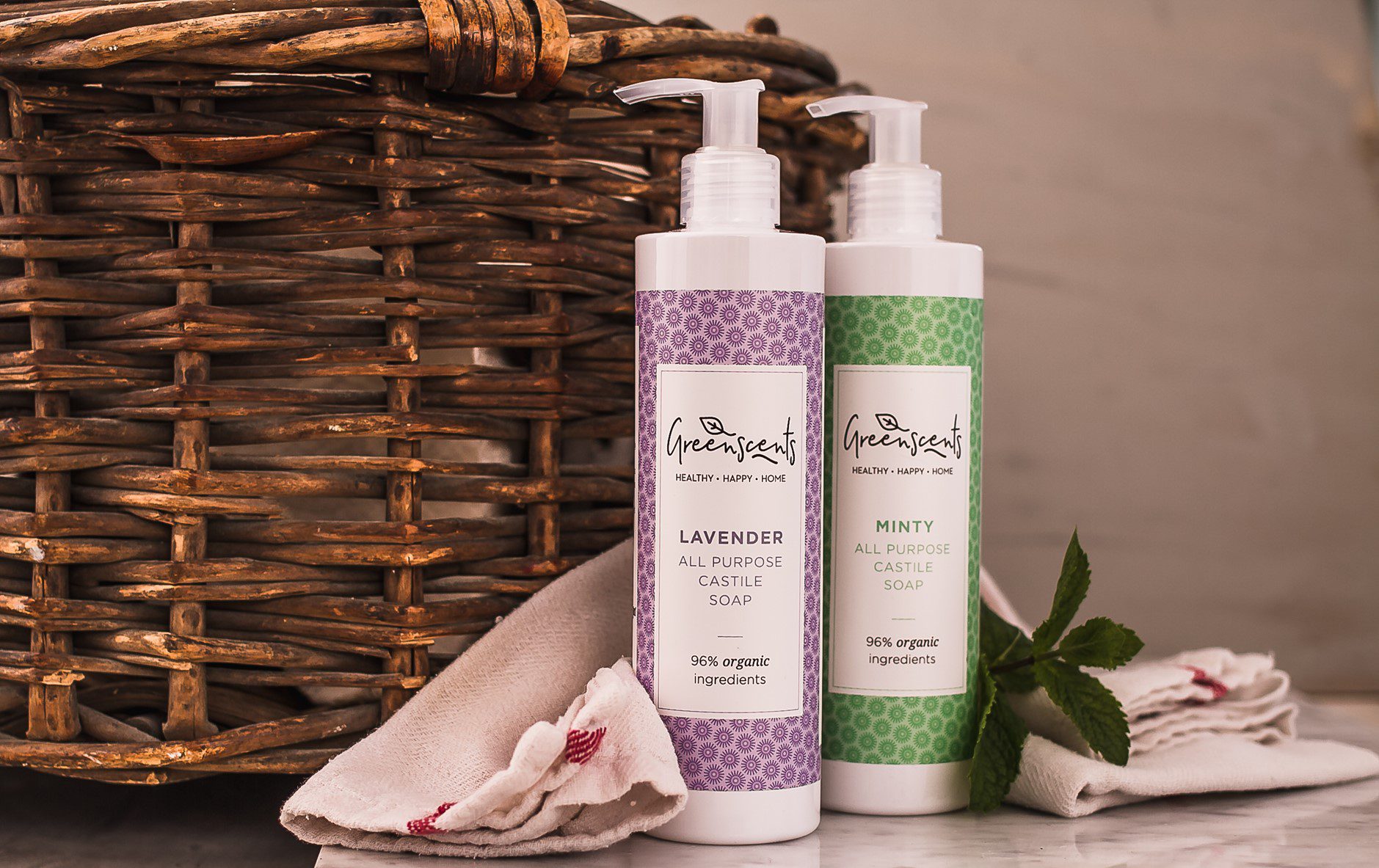 By becoming a conscious consumer, you can do much to help raise the status of animals and ensure higher welfare standards. At Greenscents, we do not believe that it is necessary to include animal ingredients in our household and laundry ranges – so all our products are certified by The Vegan Society. The entire range is certified palm oil free which means that no animal or species suffers in tropical forests in the production of Greenscents. All products are certified by The Soil Association which supports the highest animal welfare standards on all its farms. Greenscents is proud to be an endorsed brand in the Compassionate Shopping Guide which is published by The Naturewatch Foundation who sponsor World Animal Day. That really is a positive feedback loop!